Lavally is a townland in the Ballintogher area of Co. Sligo. Traditional music, song and dance were prominent in this townland over many years with musicians and musical instruments in virtually every house. The Ballintogher Festival Committee in association with the Fred Finn Branch of Comhaltas decided to erect a permanent memorial to the musicians, singers, dancers and drummers of Lavally as part of the 60th anniversary celebrations of Comhaltas. The site for the memorial is located at a crossroads in the heart of the townland of Lavally and was donated by the Bright family. The polished stone on which forty eight names have been inscribed was sculpted by local stone craftsman, Seán Diamond and his sons, Finbar and Malachy. The memorial was unveiled on Sunday November 6th 2011 by the Árd Stiúrthóir of Comhaltas, Labhrás Ó Murchú.

At a ceremony after the festival in 2011 a presentation was made to the Bright family in recognition of their generous donation of the site for the Lavally monument. 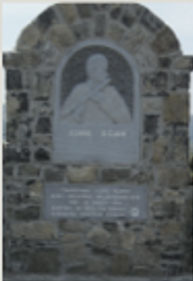 In order to mark the centenary of the 1916 Rising a small garden of remembrance was developed in Ballintogher village. A polished granite plaque displaying the Proclamation was unveiled during the festival on Sunday October 23rd 2016. Seven trees to commemorate the signatories were planted by descendants of local members of the Irish Volunteers, the Irish flag was raised and the Proclamation was read by a young boy whose forebears were involved in the War of Independence. A book detailing some of the historical happenings from 1916 to 1923 in the locality was researched by Seamus Mac Cormaic and published as an element of the festival.